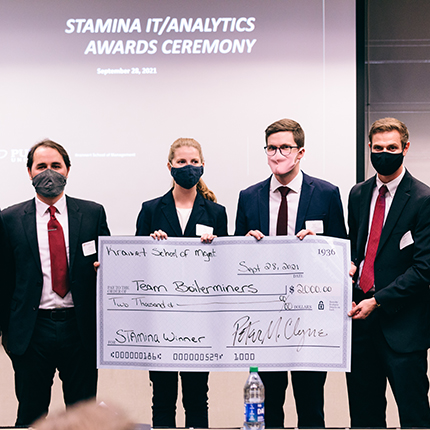 Calling themselves the “Boilerminers,” the team was composed of Alejandro Brillembourg Cuenca, Michael Jonelis, Piper Doyle and Ryan Egbert. They bested 18 advancing teams of four in a case for DRONEDEK, a pre-revenue startup company based in Indianapolis that Daniel O’Toole founded and organized in 2020 based on patent information approved in 2017.

The company plans to revolutionize the e-commerce delivery industry by developing, distributing, and servicing secure temperature-controlled receptacles for autonomous drone deliveries, both for personal and commercial customers.

Using the internal information provided by DRONEDEK as well as external data sources, each team proposed three locations in the United States, at the city or town level, for their pilot program. Students had to determine how these locations compare, as well as to identify which data variables and criteria are most important when selecting the pilot locations for DRONEDEK.

“The professionalism, creativity, command of information, and communicative skills exhibited by virtually every participant was surprising and excellent. It was a tough field, which made it very hard to pick a winner,” says O’Toole. “The details that put the winning team, the Boilerminers, ahead of the other teams were minor items that allowed them to edge the competition.

“They possessed a very good flow. They compartmentalized each topic with each one of the participants. They were crisp, on point, and had a clear path for delivery. They dressed professionally, looked the audience in the eye, and did not rely on the use of note cards for delivery. Further, they answered audience questions with a genuine command of the subject material.”

“Each year the student groups seem to raise the bar on the quality of their presentations and this year’s competition demonstrated a continuation of that trend,” says Clyne, who recently retired from Leidos as senior vice president of corporate development.

“The case gave the students an opportunity to make recommendations directly to the founders of the tech company, which injected a dose of reality and value to the students’ efforts,” he says. “We were particularly impressed that the level of experience and maturity of the students participating this year ranged from freshmen to graduate students, which further demonstrated the appeal of experiential learning to a broad population of students.”

According to Clyne, the winning team packaged a tight, concise set of slides with an energetic and well-rehearsed oral presentation. “Most importantly, the team used data to support their recommendations and communicated their analysis through a well-organized and compelling narrative,” he says. “They fielded questions with ease and confidence, which underscored their credibility with the audience.”

Boilerminers team member Michael Jonelis says the team’s analytical work helped their presentation stand out from the others. “Our analytics skills were definitely very important,” he says. “After we had our core idea, we did a lot of research, critical thinking, and problem solving. We wanted our analysis to be deep and thorough and to give DRONEDEK a plan that was actionable without a lot of additional work. To that end, we looked at our idea through financial, marketing, operations, and strategic lenses. We really applied everything we could to flesh out our idea as much as possible.”

According to Boilerminers team member Alejandro Brillembourg Cuenca, “This experience has been very helpful to me as it highlighted the importance of making recommendations that are data-driven but also information-driven regardless of how bold or uncomfortable they may be. Beyond that, it helped me practice my analytical skills and my ability to defend a particular stance or recommendation.”

Piper Doyle says the team's interactions were also complementary to the competition. "I learned the importance of working with a team I like," she says. "We were able to have fun throughout the competition because we enjoyed each other's company and didn't take ourselves too seriously. Having a great team is essential in making the late nights and long hours of work worth the effort."

The Krannert Communication Center and the Krenicki Center led and directed the competition with partners and sponsors including the Larsen Leaders Academy, Purdue Libraries, alumni, and Purdue's Technical Assistance Program.